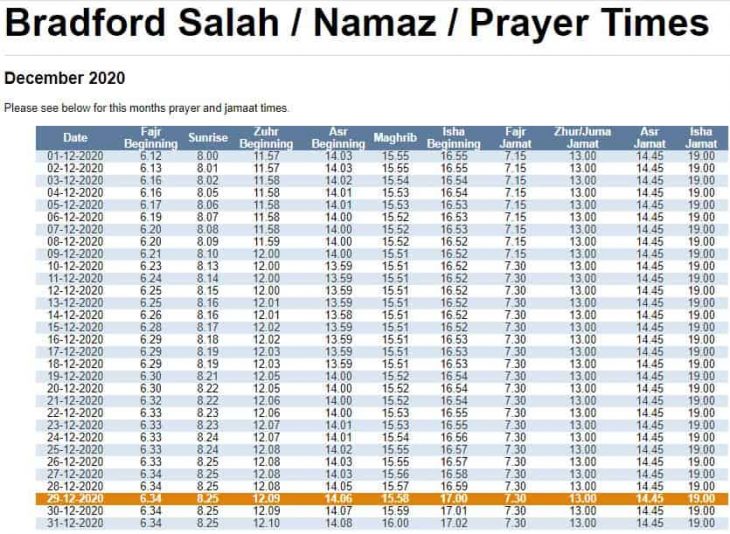 Living in Bradford, you also might be one of those Muslims who pray in the famous Victor Street Masjid. People praying in the Victor Street Mosque would be able to view namaz timings in the mosque itself.

But ever since the outbreak of the coronavirus people tend to stay at home, now that praying is allowed while keeping social distance during the Jamat as well, some people who used to pray regularly have lost track of prayer and Jamat timings. Or if you are someone, who needs to keep track of the prayer timings so you can catch the Jamat on the Victor Street Mosque on the way back home, then you are just at the right place.

The Fajr prayer (The Dawn Prayer) consists of two fard (obligatory) rakahs. As of the 23rd of December 2020, the Fajr prayer starting time is around 6:33 am and if you are willing to catch the congregational prayer then you should try to reach the mosque at 7:30 am. The Jamat is expected to start around that time. The sunrise timings currently are at around 8:23 am, so make sure to pray Fajr before that.

The Zuhr prayer (The Afternoon Prayer) consists of four fard rakahs. The starting time of the Zuhr prayer in Bradford is around 12:07 pm. The Jamat for the Zuhr prayer starts around 13:00 or 1:00 pm. If you are considering the Juma’a prayer (Friday prayer) then the timing for that is also the same for Victor Street Masjid, which is 13:00 or 1 pm.

The Asr prayer (The Evening Prayer) consists of four fard rakahs. The starting time for the Asr prayer in Bradford is around 14.01 or 2:01 pm. You can pray your Asr prayer at home or office after this time. However, for the Jamat, the timings are 14.45 or 2:45 pm.

The Isha prayer (The Night Prayer) consists of four fard rakahs. The starting time for Isha is around 16:55 or 4:55 pm. The timings for the congregational prayer of Isha is around 19:00 or 7 pm.

According to the current season and timings of prayers one minute on each prayer increases in 3-4 days. This can make it easier for you to keep track of prayers. However, sometimes prayer timings change in bigger differences of minutes, for which you can keep track either on the mosque or at the Victor Street Mosque timing site. We hope this article helps you pray on time and catch your Jamat prayers regularly.