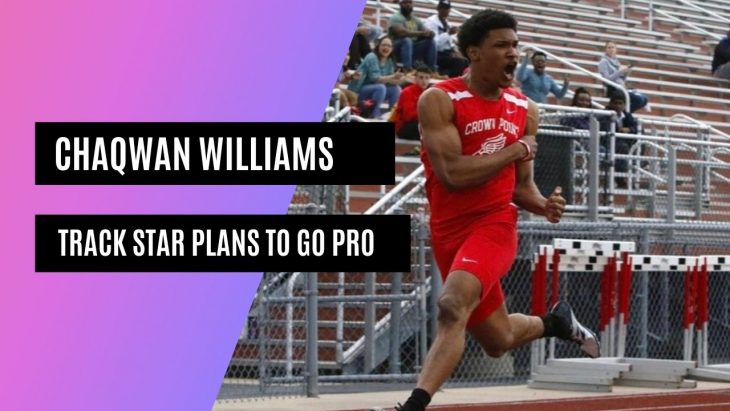 Having the option to pursue your career while you are still a student boosts confidence in yourself. But it can sometimes be confusing as well. Imagine being a successful professional in a field and your studies are not yet complete, so you have to choose between whether to complete your academics or pursue your career where you have done quite well already.

Chaqwan Williams, Collegiate track and field star sprinter and recent National Champion, also went through the same situation. It’s a tough decision for the sprinter to quit Crown Point High School, as the school and coaches there played a significant part in his career that leads him to win the national championship.

On his official Instagram, he gave a statement when the school was cut short due to COVID19. This shows his emotional attachment to the school.

I’ve had a good 4 years. Would never think high school would be cut short because of a virus, not so much unfortunate but upsetting. If I could go back I wouldn’t change anything, but relive it. Never a down in my journey. Thank you to Crown Point High School, Coaches and everyone who has been by my side. – Chaqwan Williams

Williams has the option to continue his collegiate career with an Institution of his choice or compete professionally and sign a hefty contract totally over $1.1 million.

So, the Indiana Tech Sprinter declared his separation from the program after securing a National Title to seek other opportunities for his career.

To commit to a decision, one should have faith in God that the plan will go well. Faith can help make better decisions. Faith empowers a believer with the humility of the human condition, empowers us to deal with reality and to do our part of the deal, and opens us up to the hope that God will do his part as well. This is what Chaqwan Says:

“I will have a discussion with god, and we will figure it out together.”

Well, besides making the firm decisions, there still be other options available. So Chaqwan has not entirely closed the doors for his collegiate career, but his decision is leaning more on the professional side. But he says his options are 100 percent open as of now.

Let’s see if he come out with any other decision in the near future, but the decision to continue his profession seems promising.