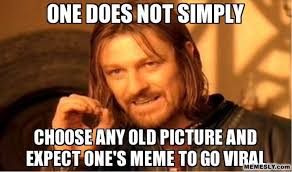 Memes are one of the funniest fads we can find around chats and social media and are often a way of communicating your thoughts with a single image, often with the goal of entertaining the viewer. The meme is a factual image taken from a famous scene from a movie, TV series, cartoon, or other video content on the Internet, serving as the basis for writing on funny phrases adapted to the context.

Memes have become such a big part of the internet that even the art of creating a meme has become a meme. So much so that sub cultures have their own memes, which outsiders might not even understand. For example, in the graphic design community, there is a graphic design is my passion meme. A graphic designer will automatically laugh at it but others will need context to understand it.

So, do you know how some of the most famous memes started and what was the context behind them? If not then don’t worry, we will tell you all about them.

In this meme, we see Mr. Calvin Candie, aka Leonardo Di Caprio, laughing slyly and mockingly in the Django Unchained movie. This meme is always accompanied by mocking and irreverent handwriting (like “but do you really know how to do this thing?” Or “you telling me you’re unemployed?”) more often than not you will find the protagonist holding some object related to the meme.

Another hugely popular meme, based on an image available on the internet in which a boyfriend is seen watching another girl go by, with an obvious negative reaction from his girlfriend. This meme has been modified in every way and is found as well with writings as with objects of all kinds to replace the faces of the protagonists. The meaning is simple: we already have something but we were easily distracted by something else happening in the street, not necessarily linked to the sentimental sphere (in fact, we can really find everything instead of the faces of the protagonists: from consoles, football teams, sporting events, etc.).

This meme has always represented cunning, as it shows a man putting his finger to his forehead to say “I use my head, I’m smart”. Accompanied by all possible types of writing, this is the perfect meme for showing others the trick or “I found the solution myself”.

Another cute meme in which you see a boy smiling in the first box but immediately after being stunned by the disappointment. It is always accompanied by two messages: a positive (where the boy laughs) and a negative (where the boy is surprised), often linked by the same context or theme.

Another famous meme where you see a house on fire in the background and a little girl in the foreground, with a very sly smile. It’s the quintessential sneaky meme, almost as if to say “who knows who burned the whole house down?”. It is often used to highlight situations which one can construed as sneaky and mischievous.

Woman shouting at a cat

In this recent and famous meme, we find a woman screaming in despair at a cat, who doesn’t seem to care a bit. Widely used by young people and modified with messages of all kinds, even if sometimes the cat is replaced by other objects or people.

It is not easy to enter Mordor

Another historical meme in which Boromir, one of the protagonists of The Lord of the Rings movie, is seen warning society that entering Mordor is not at all easy. Become one of the most famous memes and is often modified to always make the idea of ​​something difficult to achieve because “it is not easy … to explain how to use an iPhone”.

Shut up and take my money!

In this meme, we find Philip J. Fry, the protagonist of the Futurama cartoon, who actually throws money for something he craves, no matter what the cost. One of the oldest but still used memes, to be taken out with every release of a new iPhone or a new electronic device that we must have at all costs.

Another famous meme where you see an old man working on his PC and smiling. The smile is interpreted in the meme in a mocking manner, often accompanied by writings related to novice users with the computer such as “I finally turned on the PC, now I can use it”, “I have disabled the computer. antivirus and everything froze “or” I created the Instagram account and I have already been banned.

These are just a few of the funny and super cool memes that can be found on social media and in chats: in fact, new and funny ones appear every day, so it is advisable to always stay up to date. and to keep the most beautiful memes in hand or that represent us for that matter. There are some other ways of entertainment that include fun facts, riddles like Someone’s mother has 4 sons: north, west, and south. What is the name of the fourth son.