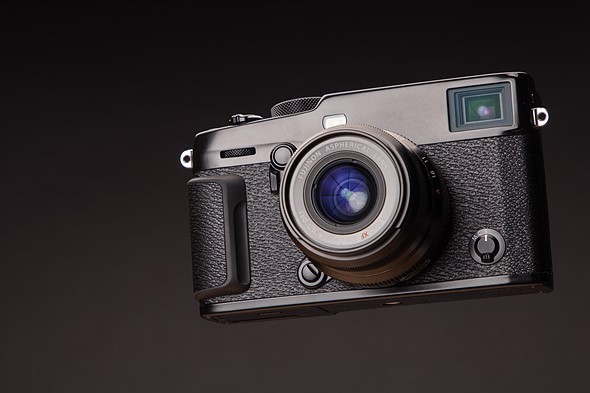 In the Fujifilm X-Pro3, in addition to its traditional retro design, we see a call for classic viewfinder viewing and an expanded set of film-based picture profiles. It seems that the X-Pro3 was created for those who dream of shooting on film, but do not want to risk and “bother”. However, this is only a cursory glance. Let’s see how the new device will show itself in action.

If earlier camera manufacturers tried to surprise us with new and new options, now we sometimes observe the opposite trend: we are surprised that they remove something obvious. The first look at the Fujifilm X-Pro3 is puzzling: where is the screen? The situation becomes clear if you get a little imbued with the philosophy of the camera: the manufacturer encourages the photographer to use traditional sighting through the viewfinder, which helps to “be in the moment”. Moreover, the viewfinder here is not simple (electronic or optical), but a hybrid one. Those familiar with previous models in the Fujifilm X-Pro series compact cameras of the X100 series,

There is nothing to surprise, for the rest I will tell you that Fujifilm X-Pro3 combines an electronic and an optical viewfinder. The latter is executed in the manner of rangefinder cameras – the photographer sees not only the area of ​​the frame but also what is happening beyond its borders. The composition itself should be built using a framing frame, which is superimposed on a translucent screen – the size of the frame depends on the lens that is being used at the moment. On the back panel, there is a compact color screen on electronic ink (E-Ink). It displays the current Film Simulation Mode, ISO and White Balance by default. However, Fujifilm did not dare to remove the LCD screen at all, so on the X-Pro3 it just modestly turned away from the user. It’s as if it’s not there, but if you really want to, just one hand movement – and voila! He is in front of us, with a whole range of modern options. This is perhaps the main secret of the new camera: I wanted to play the old-school film photographer – please; tired of playing – exhale and enjoy the benefits of progress.

All of the above are important, but still secondary characteristics. And what about the main ones? What’s inside the X-Pro3? And here, unfortunately, the manufacturer did not want to surprise us with something: in terms of electronic “filling” the new camera, in fact, duplicates the successful  Fujifilm X-S10 model. In particular, it uses the same back-illuminated 26.1-megapixel APS-C X-Trans CMOS 4 sensor, a similar X-Processor 4 image processor and a hybrid autofocus system (in contrast and phase detection). The number of focus points is 425. In comparison with the previous generation of the series, the progress is significant  -both in the number of points (in the X-Pro2 there were 273), and insensitivity: now autofocus works under the illumination of -6 EV, that is, almost in pitch darkness. The Fujifilm X-Pro3’s ISO range is 160-12800 units (extended – 80-51200 units). The maximum burst speed is 11 frames per second. The camera is compatible with Fujifilm X mount lenses.

Despite the fact that the X-Pro3 is positioned primarily as a camera, video lovers are also not deprived of: the device supports 4K video shooting at 30 frames per second (in Full HD you can shoot at 120 frames per second). There is a 2.5mm microphone port, but no headphone port.

The camera includes two SD card slots with UHS-II support and can be connected to external power sources via a USB 3.1 (Type C) connector.

So, it turns out that within the series we see a number of significant changes, but if we consider the entire family of Fujifilm cameras, the X-Pro3 looks more like a variation on the already well-known product (X-T3), with which the vast majority of technical characteristics have in common. In light of this, its “oddities” become better understood: the manufacturer justifies the appearance of such a device with an enhanced retroflex, trying to play on the emotions of a potential buyer who is thirsting for film romance.

Fujifilm’s new camera does not look much different from its predecessor, the X-Pro2: the manufacturer is faithful to retro-style and analog controls. The main visual difference is, of course, the new principal of the LCD screen layout, we will return to this point in more detail a little later. Less visible to the eye, but also a very important innovation – the material from which the camera body is made. Fujifilm focuses on the reliability and durability of the new camera: the chassis is made of magnesium alloy, and the body is coated top and bottom with lightweight, durable and corrosion-resistant titanium for maximum protection from the weather. This is a really important innovation, as the X-Pro3 is largely aimed at street shooters, for whom the ability to take shots not only in ideal weather conditions is important.

Fujifilm X-Pro3 has three variants. The basic version that I had for testing is completely black, without any special coating. There are also two variations with a special Duratect coating that protects the case from scratches without disturbing the titanium texture: DR Black and DR Silver (black and silver, respectively). The Direct version of the camera costs $ 200 more, and I have to admit that this is not entirely overkilled: in my test, I found that scratching the top of the case was a piece of cake. The weight of the camera with batteries and a memory card is 497 grams, dimensions are 140.5 × 82.8 × 46.1 mm. This is a weighty and solid-looking device, it will not fit into a miniature handbag, but it will not make your luggage much heavier when traveling, especially if you use prime lenses with it – as the manufacturer recommends.I tested the camera with them, namely FUJINON XF 16mm F2.8 R WR, FUJINON XF 35mm F2 R WR and FUJINON XF 56mm F1.2 R.

The Disposable camera is comfortable to hold thanks to the anti-slip coating, the right-hand grip in the front and the thumb protrusion in the back.

Let’s take a quick look at how the ergonomics of the camera are organized. On the left edge, under the cover, there are connectors for a microphone (2.5 mm – an adapter is supposed to be used) and a USB Type-C port, with which you can charge the battery or provide a wired connection between the camera and other devices.

When it comes to sighting tools, the Fujifilm X-Pro3 is truly original. As I mentioned, the main LCD is hidden from the user here. It can be tilted, but its position will be unusual – either perpendicular to the camera, or in its plane, but lower. It is assumed that the photographer will work mostly with the viewfinder, and use the screen as an additional tool for reviewing the captured images. The screen has a diagonal of 3 inches and a resolution of 1,620,000 pixels – far from being extreme, but sufficient. And, by the way, this is higher than that of the same Fujifilm X-T3. It is equipped with a touch surface that allows you to focus/take pictures by touching, page and zoom in pictures while viewing. It is also interesting that certain screen gestures can be assigned to call certain functions: for example, swipe to the right on the screen – call up the white balance, swipe to the left – call up the autofocus zone selection. In principle, the function is curious, but it is somewhat strange to see it in such an “analog” camera – the screen, as conceived by the creator, is closed during shooting, why are there so many touch control options here?

The main menu of the Shoot camera is called up by the corresponding button on the back of the case. It is organized vertically and contains seven sections (including “My Menu” where the user can add the options he wants). Each of them contains up to four pages with settings. The settings for each option open in a drop-down box on the same screen. The menu is completely Russified, you can navigate through it using analog controls – touch control, unfortunately, is not available. The menu is quite cumbersome, it will take the user time to master it and quickly navigate in it.