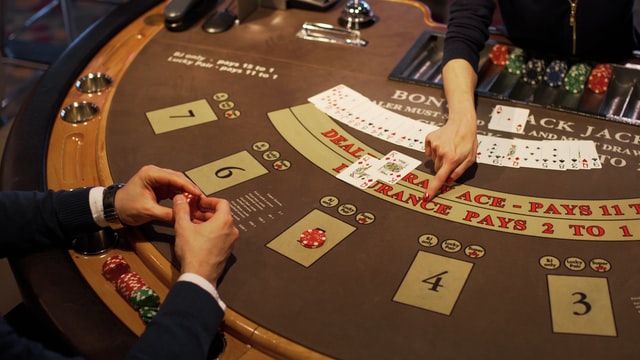 Everything on Red! Casinos are not only extremely popular but also extremely widespread in the online version. New online casinos are listed, for example, at www.newcasinosite.org.uk and offer interested gamblers the opportunity to enter the world of online games entirely at their own gusto. But how do laymen actually learn the tricks of the trade that await them in the casino world? Experienced authors have written books that can help you as a hobby gambler to learn more about the secrets of the gaming world. Here you will now get to know the best books that can help you get started in the casino!

Edward O. Thorp is not only a gifted gambler, but above all a math genius, who in turn invented the first portable computer with Roger Baldwin. He has used probability theory to create techniques and strategies for achieving better success in the casino. The book Beat the Dealer deals exclusively with the popular game of blackjack and was the first book in the world to explain the use of mathematics and its success. Card counting is the secret used by O. Thorp in his 1962 guidebook and is considered the ultimate guide in many areas. Professional players rely on the work as well as laymen who want to better understand the world of blackjack.

Gambling 102 also uses mathematical analysis to better understand the world of gambling. Mathematics was a horror to most people in school, but geniuses, such as author M. Shackleford, have harnessed the tremendous power of mathematics to their advantage. The guidebook deals primarily with the subject of chances of winning and provides tips on how these can be optimally estimated. The uncomplicated and simply written chapters make it easy for beginners to understand the strategy. Anyone who has read this guide will be able to understand the technology behind factors such as the pay rate much better!

Public Enemy Number One is not a guidebook in the classic sense, but a biography that has it all. The book is based on a true incident and tells the story of Patrick Veitch, a gambler who brought bookmakers to their knees. The genius managed to win more than 10 million British pounds in gambling in eight years. His charm and wit are revealed in this hilarious novel that takes a closer look at his story. Step by step, his career is illuminated, which turned him from a perpetual loser into a loot maker. Today, Veitch is one of the most feared gamblers in Britain and enjoys sharing his success story with his readers.

Have you heard of John Scarne before? Haven’t you? He is considered the world’s leading luminary in the field of gambling and is recognized as an expert beyond the borders of his homeland. He himself is not a gambler at all, but a professional in the field of card games. He not only masters magic tricks, but can also benefit from his expertise when it comes to card games. In his guide, he takes a closer look at the winning probabilities of individual games of chance. It is not only about blackjack and poker, but also about betting, slot games and much more. Gambling strategies are presented in detail, explained and presented in a way that is easy to understand even for laymen. A book that will make it easier for beginners to understand the complex world of casino.

Poker fans have certainly heard the name Doyle Brunson somewhere. He is a multiple World Series of Poker winner and makes his living as a poker professional. His book is perceived in professional circles as the bible of the game and is existential for anyone who likes to play poker. In fact, the book deals exclusively with poker as a game of chance, other areas of the game are not considered. However, it is not only about classic Texas Hold’em, but also about classic offerings like Seven Card Stud and Stud Poker.

Burning the tables in Las Vegas is a book that deals mainly with Blackjack, one of the most popular casino games in the world. Those who like to read little and fast can be quickly overwhelmed in view of the volume, but even sound browsing can be worthwhile. Because Burning the tables deals with all eventualities in the game and also takes circumstances such as anger or emotions into focus. In addition, it also deals with topics that become relevant above all in casinos on site. From tipping dealers to dress codes and common manners, many areas of casino life are highlighted here.

Blood Aces reads like a crime novel, but is a real-life biography that explores the life of Benny Binion. The gangster boss is still considered the founder of the World Series of Poker and one of the most legendary casino owners ever. The book reads like the script for an action thriller, but it is merely an insight into the world of the gangster. Not only are machinations and exciting facts from the casino world reported here, but government documents are also published that were previously considered secret. So if you like suspense and action and at the same time information from the gambling industry, you should pick up this novel.

Edward E. Thorp – A Man for All Markets

Another book by Edward E. Thorp has made it to the list of best casino books and is definitely worth reading. If you want to know how the mathematical genius developed his strategies and why he came up with the idea to specialize in card counting in the first place, this book will serve you well. Here you will learn impressively about the changes on Wall Street caused by the genius and how he managed to show impressively that the bank in the casino is not the guaranteed winner after all. Whether for beginners or professional gamblers, the journey into the world of Edward E. Thorp is a must-read for anyone who sees gambling as their passion and likes to follow great role models.

Considering the large selection of exciting guidebooks and biographies, it’s time for a reading evening on the sofa soon. Comfortably with a cup of tea and perhaps with the goal of raising your own gamer qualities to a professional level!