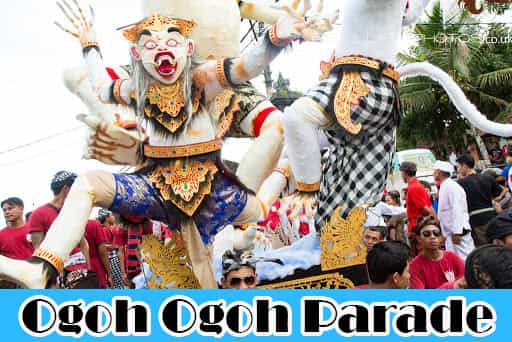 One of the most famous festivals in Bali is the Ogoh Ogoh parade, a grand and loud ceremony carried out the evening before Nyepi Day. The parade holds a deep religious context, rooted in the mythology and culture of Bali. It is one of the most popular events amongst international tourists enjoying their Bali Packages, as a number of people flock to the streets, restaurants, or the balconies of their hotels to watch the parade.

What happens in Ogoh Ogoh parade?

The parade is carried out a day before Nyepi Day, which is the first day of new year according to the Balinese calendar. Come evening, giant effigies and dolls of demons from Balinese mythology are set out on bamboo pedestals on the streets and paraded around. The parade is accompanied by tremendous amounts of noise, made by people gathering around the areas where the parade is passing through. Some people also wear the traditional attires of Bali, which is golden or white in color.

In Bali. several villages collectively form one unit, and each of these units has its own Ogoh Ogoh parade. The parade starts in the evening of the day before Nyepi Day in Bali. It passes through each and every one of these villages and its streets, and people come out of their houses and follow the parade making a lot of noises. Finally, at around 2 or 3 am, the parade ends at the destined location, where the dolls are burnt.

What is Ogoh Ogoh?

The giant dolls, which are called Ogoh Ogoh, are made from materials like wood shavings, paper and bamboo, then painted with colors. They are made to resemble demonic or malicious entities from Balinese mythology. The people of Bali start preparing the dolls several days in advance of the parade.

In modern days, deviant-looking figures doing activities like drinking beer are also used as . This is done as vices present in human nature are also equivalent to demonic forces existing in the world.

Why is parade celebrated?

The loud noise made by people in the parade is supposed to appease the malicious entities of Bali that feed on such energy. Some people in Bali also believe that it does the job of scaring them away.

Following the parade, when the dolls are burnt, people go inside their houses and complete silence is observed. Ity is believed that this will convince the demons that after a lot of noise, activity has come to a dead halt in Bali and life has evaded. Since they are left with no one to haunt or torture with negativity, they would hopefully leave the people of Bali alone for the rest of the new year that has just begun.

When is the Ogoh Ogoh parade?

Since the Balinese calendar is based on the lunar system rather than the solar system followed by the Gregorian calendar, every year has two Nyepi Days or New Year Days in Bali. The next Nyepi Day falls on March 14, 2021, and therefore, the next parade will be carried out on March 13.