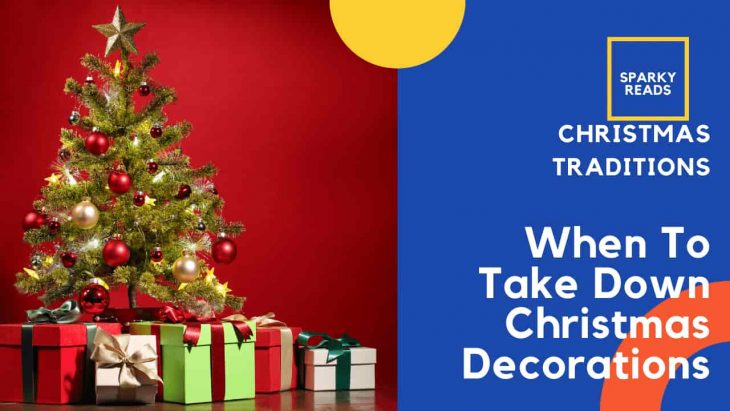 Christmas comes and goes every year, but the people like to cling to the festive spirits till the last day. They don’t want to take down the decorations till the last possible day. Everybody knows that all things come to an end and similarly the Christmas blessings have to end too. You don’t have to take down all the decorations the next morning after Christmas. Most of the people are suspicious about the time duration when they should pack up the lights and bulbs.

What is the Twelfth Night in Christianity?

What is Epiphany in Christianity?

Epiphany is a Christian feast day that arrives after the twelfth night of Christmas. A lot of Christian believers believed that epiphany is the day to take down the Christmas decorations. The concept of Epiphany is different in different churches. Some western churches follow the tradition from the 4th century and they believe that this is the day when a bunch of wise people visited baby Jesus. This is the concept according to the story of Nativity. In East Christians celebrate the birth and Baptism of Jesus on this day. According to them, people celebrate the birth of Jesus on Epiphany. The protestant churches celebrate the event of epiphany as a season and continue to celebrate till the day of Ash Wednesday. Epiphany is also called the day of adoration of the Magi. This is celebrated in the commemoration of the arrival of Magi from the east who brought with them gifts of gold, frankincense, and myrrh and he presented them to Jesus in Bethlehem. Epiphany is as important for people as Christmas therefore people celebrate this event with all their heart. King’s cake is made for Epiphany and the king’s cake is the most well-known icon of the twelfth night of Christmas. It is very popular in France, Switzerland, Portugal, Spain, Greece as well as Bulgaria. Some of the people in the United Kingdom also celebrate this eve and make the king’s cake religiously.

Why is it bad luck to leave the decorations up after Twelfth night?

According to the customs, it was thought that if you leave the decorations up after the twelfth night of Christmas then it would end up in a disaster. It is a belief of people that the tree spirits live in the trees when they are green. The spirits live in the greenery of the trees that the people have decorated in their houses. The purpose of greenery was to be brought into the house to provide a safe place for the tree spirits during the harsh and extremely cold winter days. So, according to the pious leaders of Christians, once the hard period of winter is over, it is necessary to return the greenery outside the house to release the spirits in the air. If you don’t do this then the vegetation would not be able to start growing again which means that the spring will not return and it will cause an agricultural disaster. Therefore, it is extremely important to take down the Christmas decorations on the twelfth night of Christmas if you want to enjoy the spring.

There arises a question of whether all the countries follow the same tradition or not? So, the answer to this question is that all the countries do not follow the same tradition. The reason behind this conflict is that there is a disagreement between the countries regarding the date of the twelfth night. This solely depends on when people celebrate their Christmas day. January 6 is officially the day of Epiphany. This is the faith of the Christian community that Jesus was born on 25th December. Magi didn’t arrive much later with its gifts and therefore epiphany is celebrated on 6th January and the twelfth night of Christmas is celebrated on 5th of January at most of the places all around the world. Europe and Germany follow the tradition of taking down the decorations on 6th January. However, some people in New York take them off on 1st January as the decorations were really heavy and they need time to take them off.

Children are traditionally advised that if they take down the Christmas decorations before the twelfth night then the wise men will forget the way towards their home and they will not be able to find their way as the lights on Christmas represent the star of Bethlehem which help the wise men to reach their destination.

How Can You Store Christmas Decorations?

Real Christmas trees will be easily accepted by the household, garden centres, and many community groups. They can either keep them at their store or recycle them. In this way, the Christmas tree will not be wasted. If you want to store your Christmas decorations then you can keep them in a watertight plastic bag. They will remain safe and the watertight box will save them from the damp environment as well as the pests.

The fragile ornaments of Christmas should be wrapped in tissue paper or some plastic sheet before storing them. Coil the lights around your arm and place it in a safe place. Sometimes the fairies get tangled into a mess but, you can at least try to keep them safe and store them properly at a safer place.